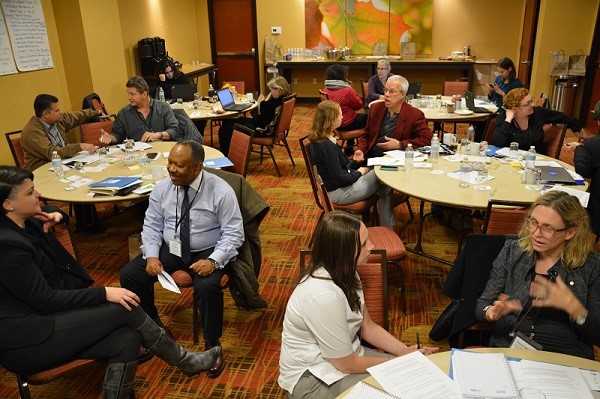 In this issue of The CORE Connection, CORE is introducing the Cultural Orientation (CO) Leaders Spotlight series as a way to highlight the work of our overseas and domestic CO partners. The CO coordinators at Resettlement Support Centers (RSCs) and the CO focal points at Resettlement Agencies (RAs) act as liaisons between CORE and CO providers in the field and are key stakeholders in our work. We hope this series will help our readers get to know these CO experts and appreciate the important work they do.

We are kicking off this series with Pat Blashill, CO Manager at RSC Austria, and Kathleen Gillen, CO focal point and Field Support Coordinator for the United States Conference of Catholic Bishops (USCCB). We’ve asked the first two to share their CO challenges, thoughts on innovation, and best practices with the wider community.

Pat Blashill has been the Cultural Orientation Manager at RSC Austria for just shy of ten years. He oversees a small CO team in Vienna, and regularly leads Cultural Orientation classes himself. Before joining the RSC, Pat was a print journalist and photographer for magazines such as Rolling Stone and Wired. He was born and raised in Austin, Texas, but now lives in Vienna with his wife and two daughters. Mel C was his favorite Spice Girl.

What is your favorite CO activity and why?
“The Money Management unit is fun to teach. Students are really engaged and into this topic the most. It’s got real qualities that people can relate to: family budgeting, housing, transportation, and more. Figuring out what a family needs versus what they want makes it real that a family needs to make choices. It is also very practical. Thinking of American values is good and important, but this exercise makes people think of the everyday stuff they’ll need as soon as they get off the plane.”

What do you consider a CO best practice?
“Being a good listener. Going into a CO class with assumptions could cause problems. If a CO trainer plays off of what is said in the classroom and then builds on that, it could really be powerful.”

Kathleen Gillen is the Field Support Coordinator and CO focal point at USCCB. She has a master’s degree from Harvard University’s Center for Middle Eastern Studies and bachelor’s degree in International Relations from Lehigh University. Prior to joining USCCB, Kathleen was the Program Coordinator for America’s Unofficial Ambassadors, an initiative promoting tolerance between the U.S. and the Muslim World via cultural exchange.

How does your previous experience help you in your role as a CO focal point?
“I joined USCCB in November 2016, so I’m new to the refugee resettlement world, but my five years of experience as a teacher and project manager as well as my studies provide me with applicable skills. As a teacher, I learned how to create lesson plans that convey complex ideas in simple ways, which can translate to supporting refugees who are facing a new environment. My previous work to counter Islamophobia also helps me tell powerful refugee stories.”

If you could innovate one aspect of CO what would it be and why?
“I would study how different sites conduct CO and create a tailored approach based on different populations such as people with different learning abilities, youth, and the elderly. Then, I would target clients who need extra support.”

CORE has been exploring ways to maximize new digital technologies as part of our Refugee Communications Project. In addition to new refugee-facing resources (such as fact sheets on the Role of the Resettlement Agency, Housing, and Education), CORE has been working with Resettlement Support Centers (RSCs) in Jordan and Turkey to pilot an SMS campaign for refugees in the U.S. Refugee Admissions Program pipeline. CORE’s Digital Initiative Officer Carmel Pryor spent a week at RSC Middle East and North Africa (MENA) and a week at RSC Turkey and Middle East (TuME) in March to help launch the campaign on CORE’s new SMS dashboard. The pilot will continue through May with scale-up planned later in the year.

The goals of CORE’s Refugee Communications Project are to increase communications touch points with refugees during the resettlement timeframe and to harmonize messaging so that refugees around the globe are receiving the same information. In addition to the SMS campaign, the project seeks to capitalize on new connectivity realities by launching a mobile-first website for refugees next month and developing a refugee resettlement app early next year.

With 60% of refugees worldwide now living in urban areas, UNHCR reports that “93% of all refugees live in places that are covered by at least a 2G network.” This presents a multitude of opportunities, both overseas and domestically, for bridging the cultural orientation experience for refugees through digital technology and phone access.